An organizational structure defines how work is done, information flows, and decisions are made in a company, department, or team. I realized that structure is fundamentally about the trade-off between integration/cohesion and speed of decision-making. In this blog, I focus on how different organizational structures affect decision-making and how to think about these trade-offs.

A lot of factors can affect decision-making speed and quality within a company. This blog post doesn’t try to name all of them. Instead, I focus on a specific one - organizational structure.

1) CEO gathers everyone on Monday, a short 15-minute discussion around work to be done, and then everyone goes off individually to do their jobs and make decisions until following Monday.

2) CEO gathers everyone for 1-hour meeting around work to be done every morning. Decisions are made during the meeting.

In the first example, the company works individually. Everyone is expected to make decisions quickly. In the second example, the team is a lot more integrated. Decisions are made slower, but they’re more coherent. Neither is better than the other. Both companies, the fast-decision one and the coherent one, can be viable.

When I write the word “decision,” I mean it very broadly. Decisions constantly happen in any job. Every action made, every word written, every sentence spoken is a decision taken.

Cohesion defines how unified a team or a company acts. Are the decisions made similarly? When different employees encounter a similar situation, do they act the same way?

Cohesion/integrity and speed of decision-making are the fundamental trade-offs when deciding on organizational structure. Let’s go through a more realistic example to weigh this trade-off.

1) Writers are a separate team, working together, receiving requests from other teams. Stronger cohesion, slower decision-making around writing.

2) Writers are integrated within other teams: lower cohesion (some of it ensured through having the same lead) and faster decision-making.

3) Writers are integrated within other teams. Their lead explicitly approves their work. An in-between choice - increasing cohesion compared to the 2nd example, but lowering decision-making speed. 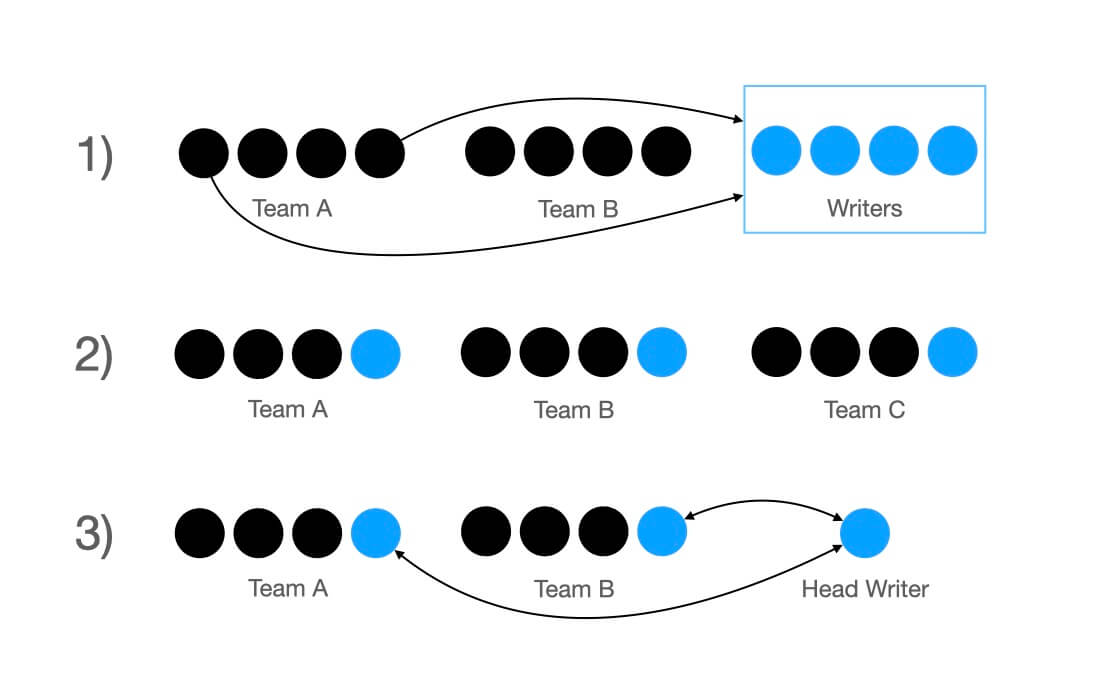 Here’s the graph showing how the options compare across the speed/cohesion axis.

Note that this graph evaluates only the writers. Team A has strong cohesion in all three cases.

As the third example shows, these options can be further augmented to increase or decrease cohesion. That’s usually done by defining the relationship between team members and their leads. If we’d like an even stronger cohesion, the whole team could approve the work in the third example. Of course, that would further reduce decision-making speed.

Organizational structure is the focus of this blog post but is not the end-all-be-all. Other tactics could improve cohesion with a minor sacrifice of decision-making speed, like good onboarding and having a writing style guide. And again, none of the options are inadequate. They purely depend on what’s imperative for your company.

In the world of software engineering, cross-functional teams are now the most common way to structure teams. These teams work together towards a set of business objectives and have all the necessary functional personnel (software engineers, product managers, designers, etc.) to achieve those objectives.

If we look through the lens of cohesion, that’s not surprising. In most tech companies, it’s more important to have cohesion around business objectives than around functions.

Imagine a functional organization - a team of software of engineers, a team of designers, and a team of product managers. To achieve cohesion around business objectives, all these functions (and their leads) need to be on the same page. That’s a lot of work. Instead, cross-functional teams make sense for most organizations. Simultaneously, most companies usually have some kind of functional reporting line to maintain cohesion around functions.

Of course, there are exceptions. Apple is the first one that jumps to my mind. From what is visible from outside about the secretive company and is occasionally discussed in articles, Apple is organized around functions. Through their products, we can see how strongly they value functional cohesion.

As I mentioned a couple of times in this post, there is no perfect organizational structure. Apple and Amazon structure their teams in entirely different ways, yet both companies are very successful. Both of these companies found what worked best for their businesses.